Smarthome/IoT for the Next Decades

As a result of 10 years of research and development, Libre Home system is now released.

Libre is All About Liberty

I chose the name Libre, only because it is the closest to the word “Liberty”.

Our products are all about liberty. It may come with a cost, but we will never compromise our principle!

Furthermore, we are willing to defend our principle at any cost!

The Only IoT System that Works

Later in this post, we will show how other systems can’t even blink a couple of light bulbs, or simply do 3-way switch right.

We aim to provide a full line of smart home/IoT products.

Initially, the following products are released: 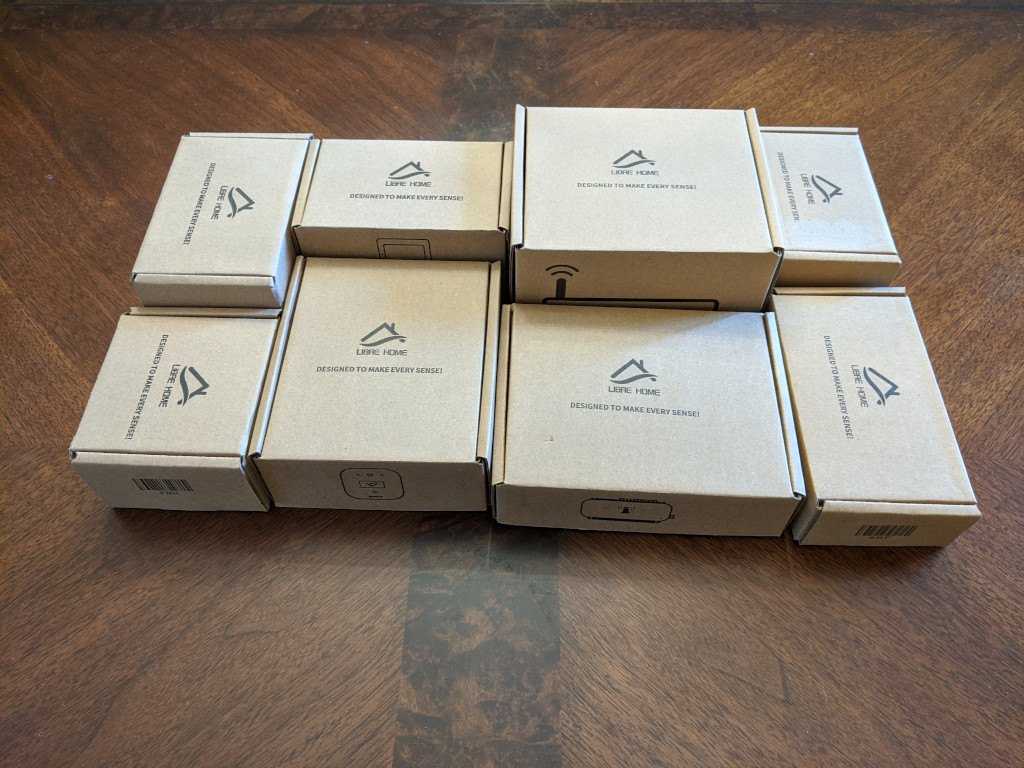 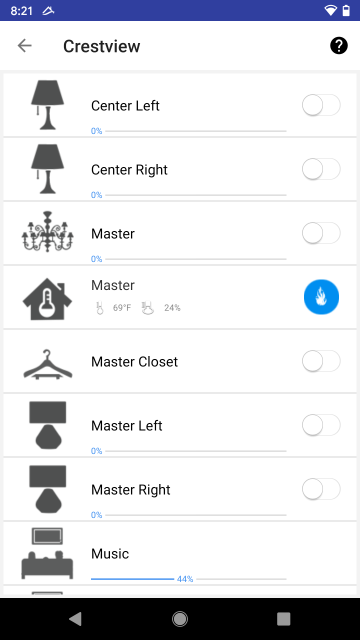 As the founder, I designed the system for myself, as well as the users. By emphasizing the users, I truly mean that the system has to be designed to make every sense for the users, with features such as:

Libre Home is the only system that offers full privacy and data protection with zero information leaks.

I believe we all should “cut ourselves clean” before we serve our users!

With end-to-end communication from users’ smartphones to their hubs, we want our uses to have as much empowerment as possible!

Users can connect to the hub through either “Bridge Mode”, or “NAT Port Forward Mode”.

“Bridge Mode” is the default.

Communication is end-to-end encrypted in either way with a unique key between Hub and each smartphone. 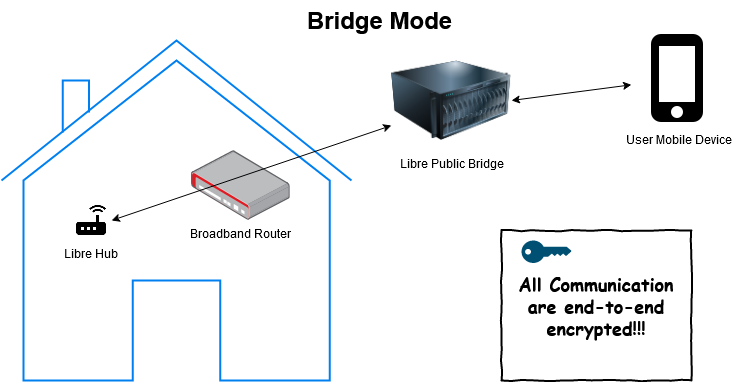 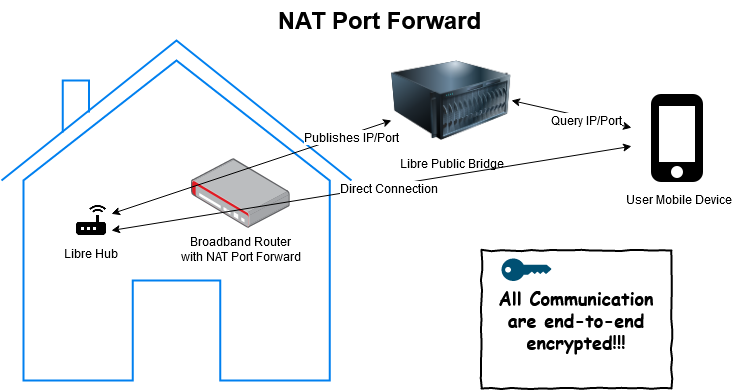 Users don’t need any extra services from us. This is a win-win to minimize costs and risks for both sides.

Libre IoT OS is a new breed of Operating System for IoT. Other systems are not.

Why Other Systems Don’t Work?!
They Can’t Even Blink a Couple of Light Bulbs!

Billions of dollars have been spent in this field. Yet, other systems can’t even blink a couple of lights at users’ requests. How smart can those systems be?

If those products can’t even blink a couple of light bulbs, God knows what else they can not do?

Well, I know exactly what other products can not do! There are infinite number of things, from mathematical point of view, in theoretical computer science. Basically they are all based on event driven ephemeral functions, which are not Turing Complete.

Smartphones depend on Apps to extend functionalities, such as iPhone or Android phones. Our system also depends on Apps, which we call IoT Apps. IoT Apps are not running on your smartphone, they are running on Libre Home Hub.

Our Apps can be running continuously providing theoretically maximum flexibility and versatility in term of interaction among “things”.

Flexible Control that Users Can Use!

Flexible and complex controls are good. But it has to be built in a way that users can easily use!

That’s how our patented technology come to play.

Blinking Any Number of Lights with Any Pattern

Below is an example, of an App task that blinks a light at a 1-second interval. User can easily add more lights and define any pattern. 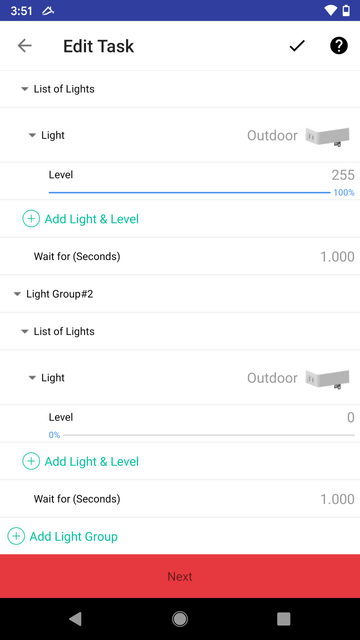 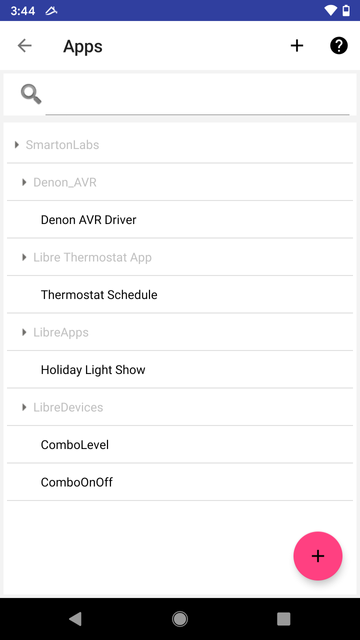 It can be shared with the whole world. 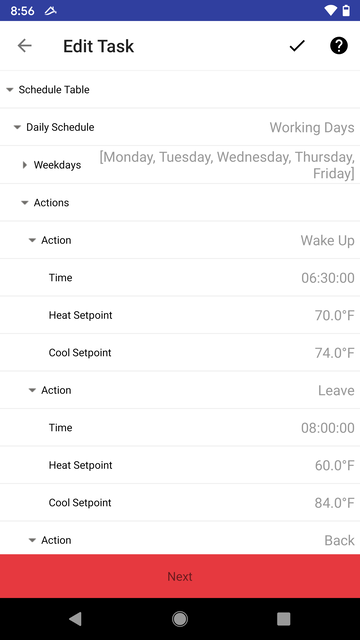 More About the Patent

Yes, I re-invented tree structure. And there is even no prior-art!

We open sourced the code for the thermostat scheduler and sprinkler scheduler. More algorithms will be added over time. For example, pulling the weather data for your home is just one line of code.

Integrating data from other devices and sensors is easier than ever. And it will all be up to users’ choices with full privacy protection and zero information leak! Choice is power!

It is a New Breed of Operating System

Android and IoS are Operating Systems for Smartphoners.

Libre IoT OS is the Operating System for IoT, the Internet of Things!

Every Hub is a Development Kit

You just need a Web Browser pointing to the Hub’s IP. It is there. 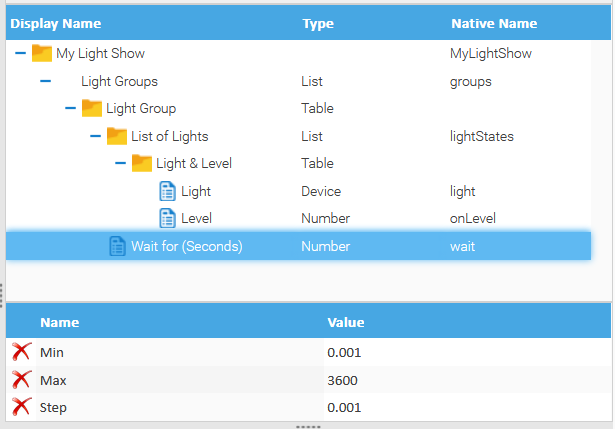 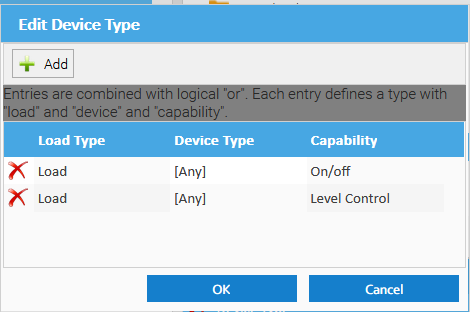 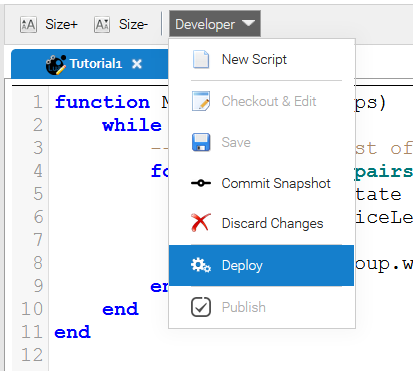 Almost every American home has 3-way switches, where a light bulb can be controlled by two switches from two different locations.

Well, what if other systems can’t even do 3-way switches control right in an consistent way?!

3-way configuration in Libre Home is easy. Just link light and switches into one group! 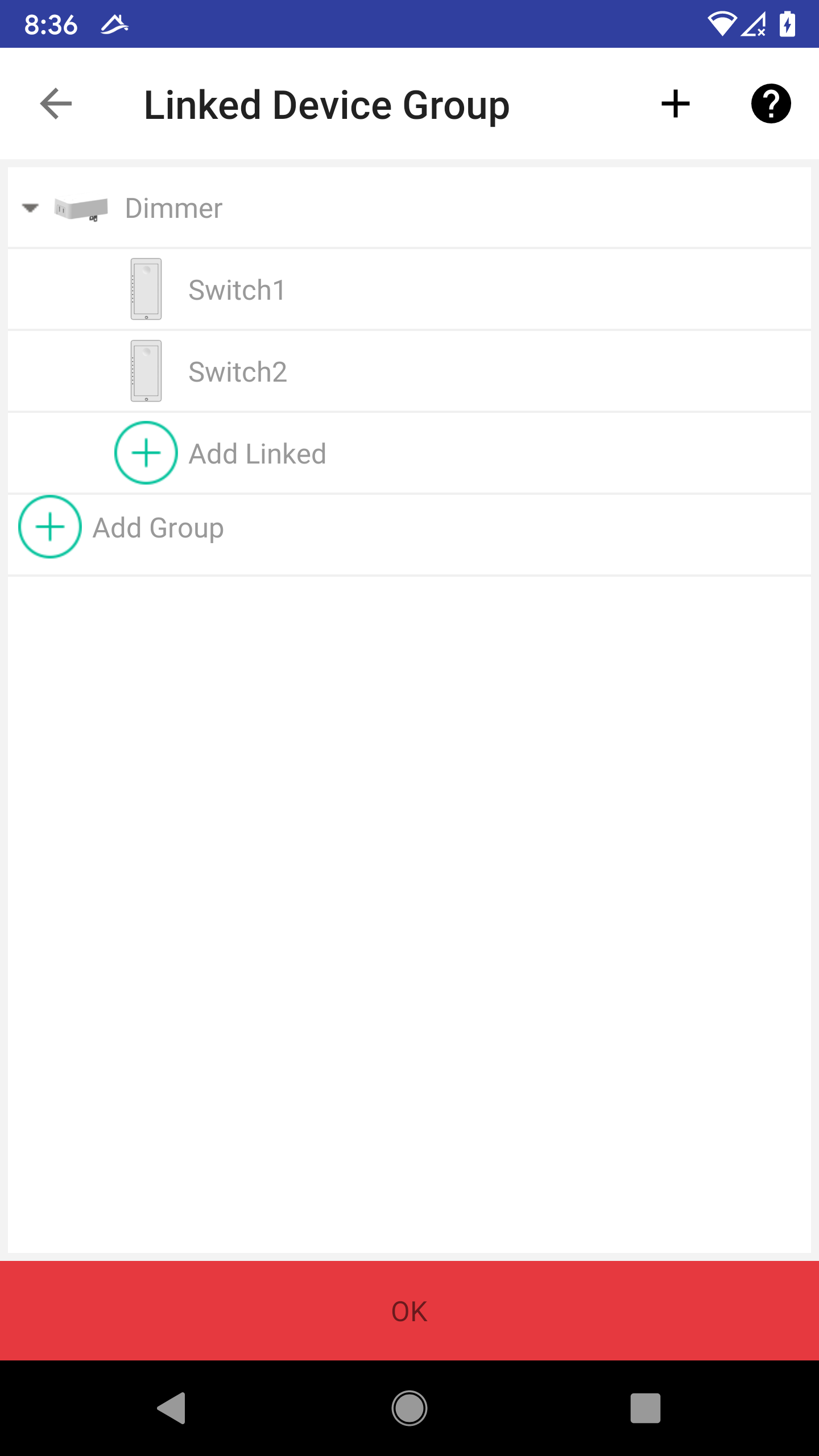 Linking goes beyond 3-way lighting. We can link anything with anything, as long as it logically “makes sense” in our system.

Linking our in-wall switch to a network controlled AV receiver volume? No problem.

Please note when you manually adjust the volume, the LED level bar on switch adjusts accordingly. It just works! 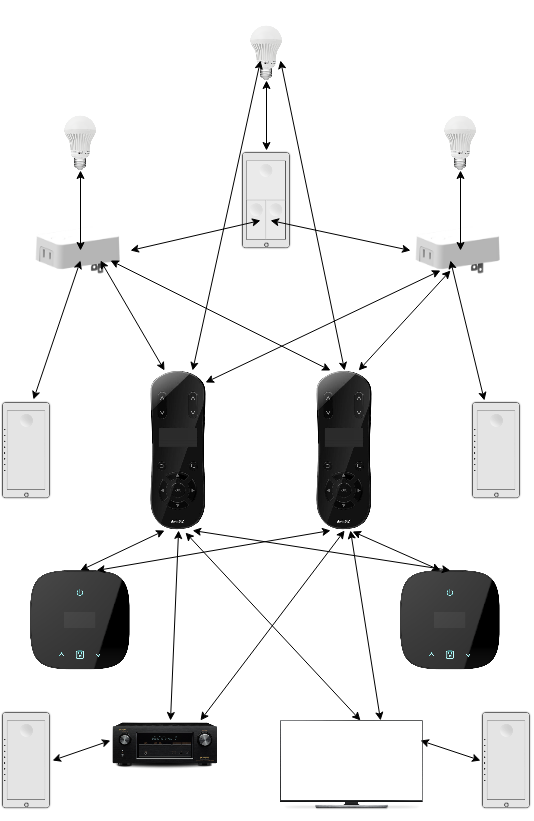 Lots of third-party wi-fi devices can be automatically discovered by our Hub.

With our App technology, developers can write Apps to drive any wi-fi devices.

An example is to drive a Denon/Marantz AV receiver and expose several devices. For example, the power will an On/Off switch. The volume control will be “Level device”, like the dimmer switch. 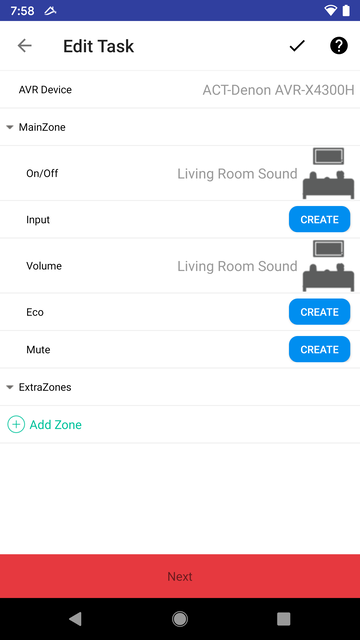 Furthermore, those devices can be linked to other devices, such as remote buttons, as already shown above.

This is the link to demo video.

With lots of Mathematics and Physics involved, we push the design to extreme.

The wireless chips we use in our products, only have a peak power output of about 5mW, while lots of wi-fi based products output 150mW of power, 30 times higher than ours.

Our engineers happen to know how to build antenna arrays for satellites.

We can achieve up to 50 meters range with 5mW and wideband antenna, which is essential for portable devices and low power sensors.

Our smart remote has over a year-long battery life with 2 X AAA batteries.

We Fix What They Did Wrong in Every Layer

I know exactly why nothing seems to work. That’s why we built thing from ground up and fixed everything they did wrong in every layer!

We even build our own wireless mesh network protocol, the Hornet Mesh Network. It fixed many problems Zigbee has.

Hub owner grant access to users’ mobile devices. Only one master password is required for Hub recovery, which is set in your home and stays in your home and never leaves. Other users don’t need any password to use the system. 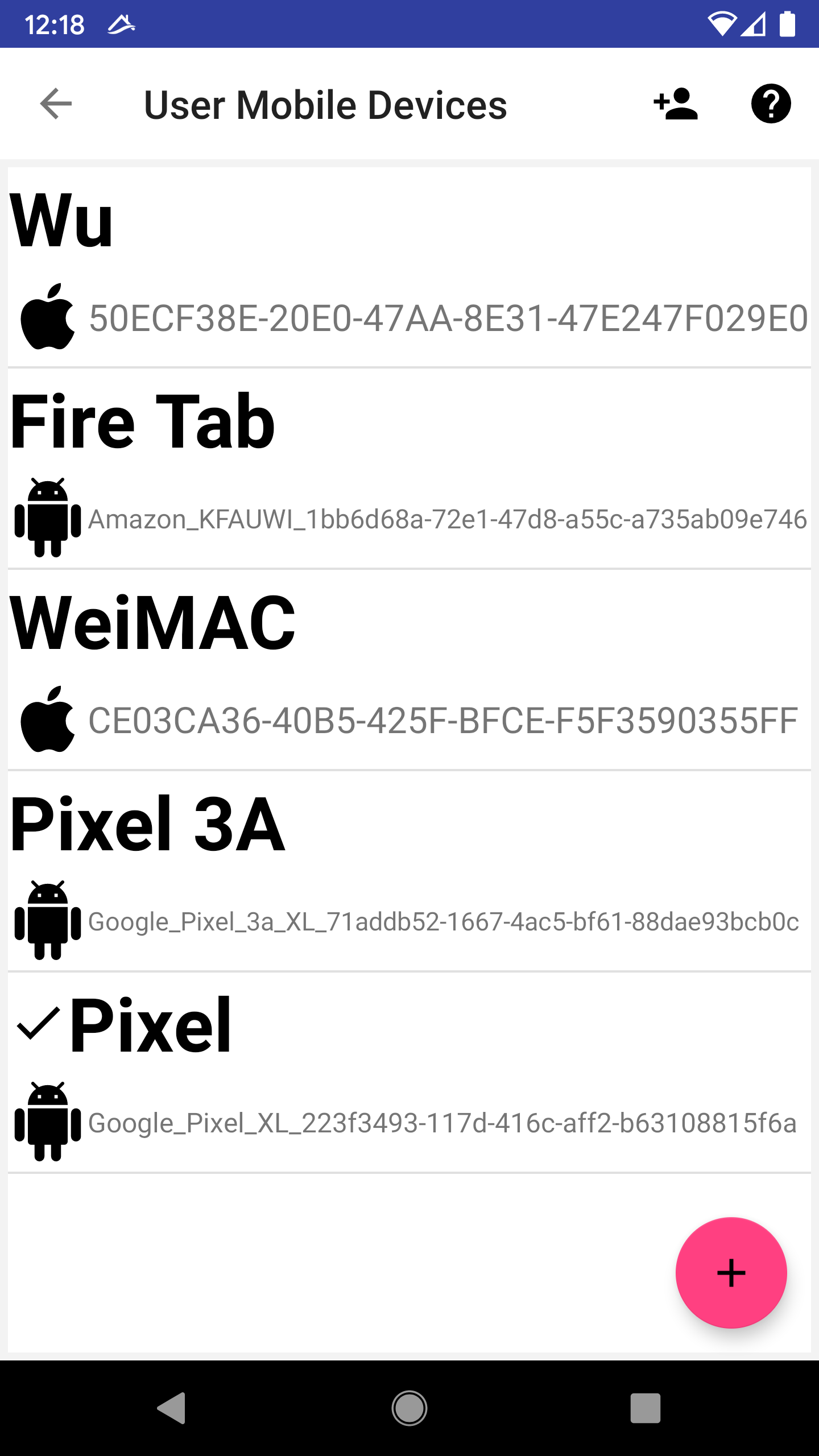 Users, groups, user privileges, and access control, everything can be customized. 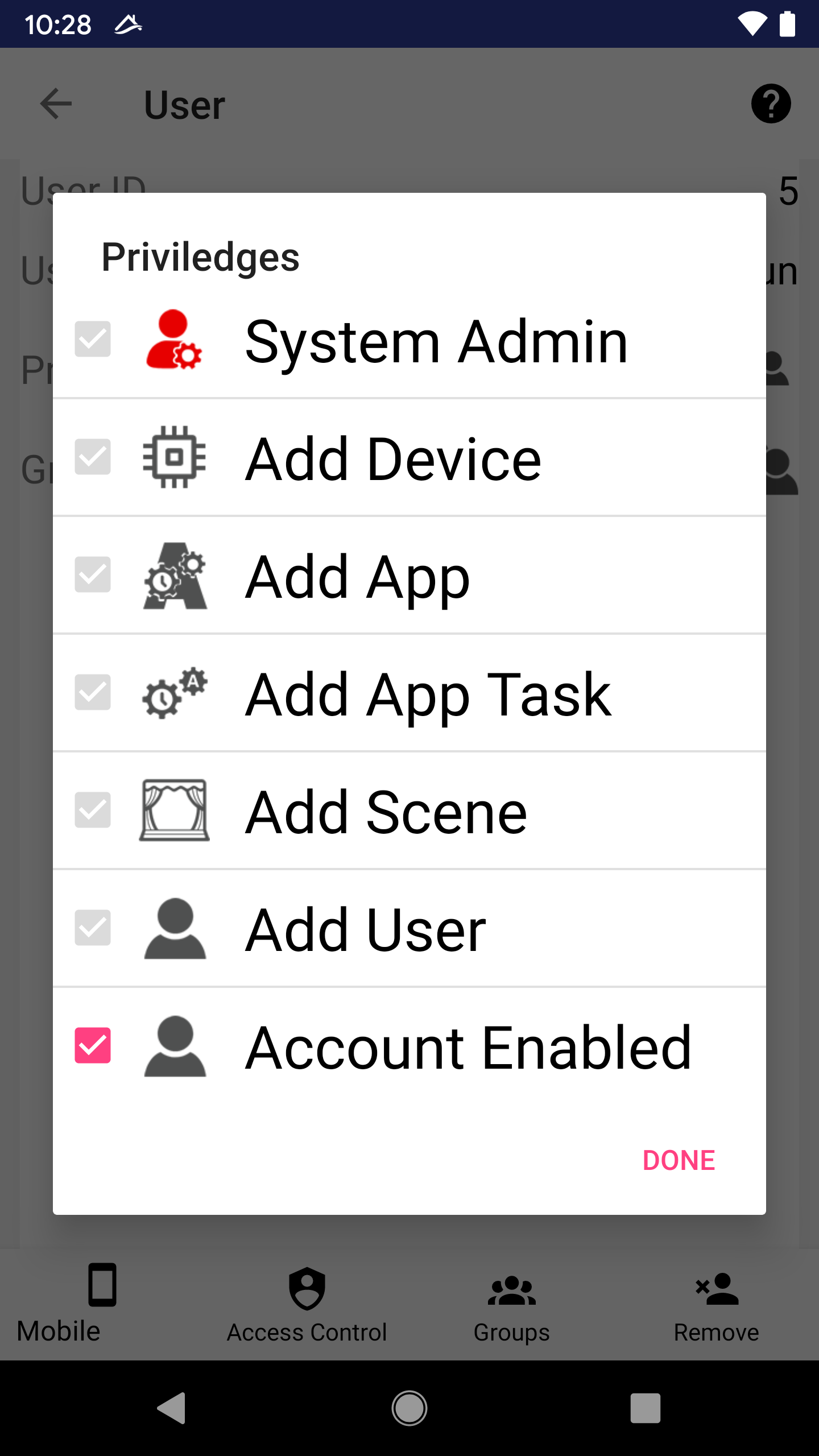 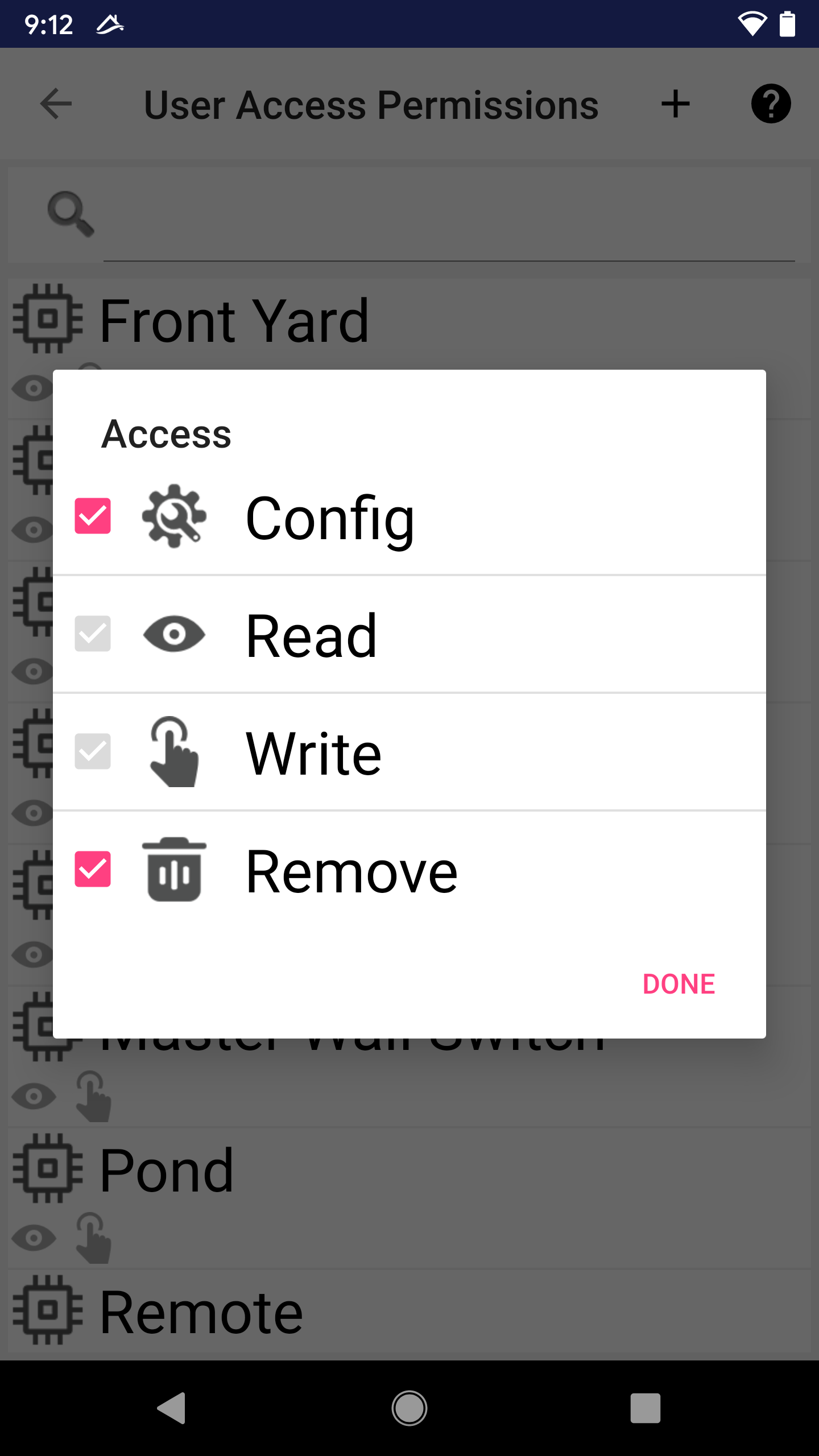 More information can be found at “Users and Security”

Our system is designed for end users to fully use their data. Users’ data belongs to users and by default Apps won’t be able to send any data out!

A hub with a small screen, that makes life a lot easier.

Apart from the classic rocker switch, we also designed unique multi-button switches, of which users can customize the color and layout.

Buttons can be easily linked to other devices. 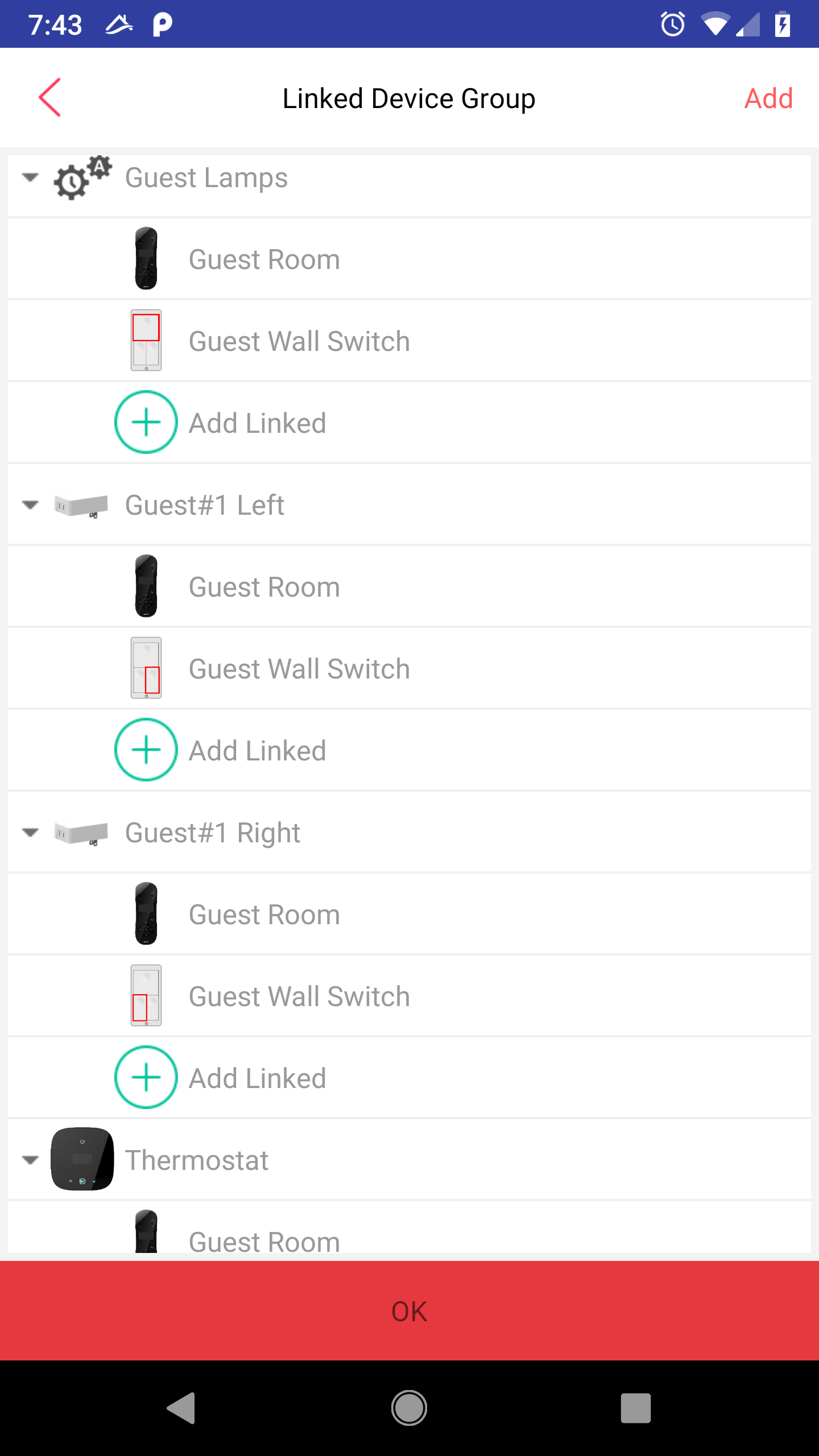 The remote battery lasts over a year (2 X AAA).

Remote can be configured with a smartphone App.

Remote is always connected. Configure changes are pushed wirelessly to the remote. If the remote is lost, the user can trigger the remote alarm beep and screen flash from their smartphone. 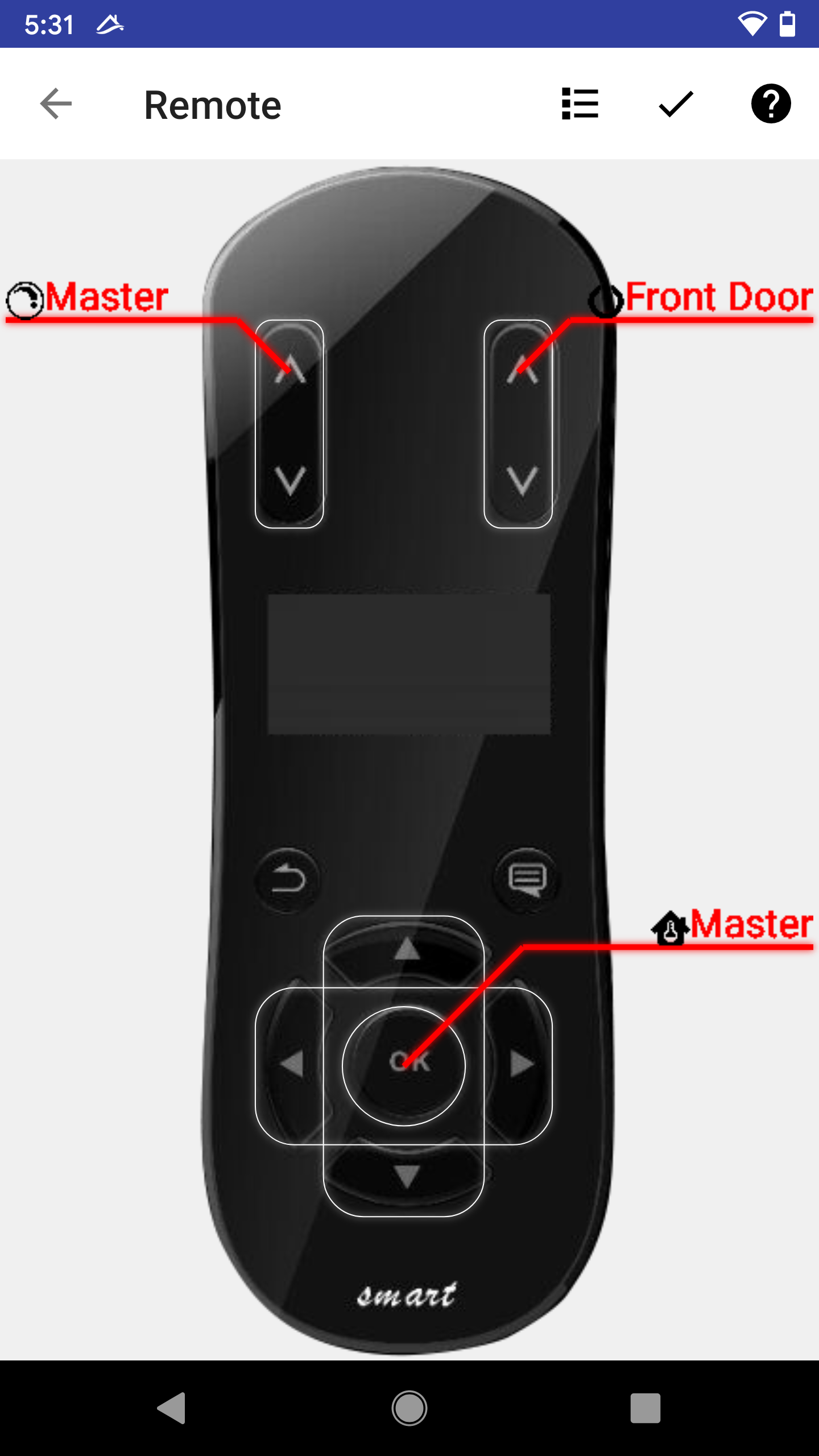 Elegantly simple, runs cooler and doesn’t steal any of your data. 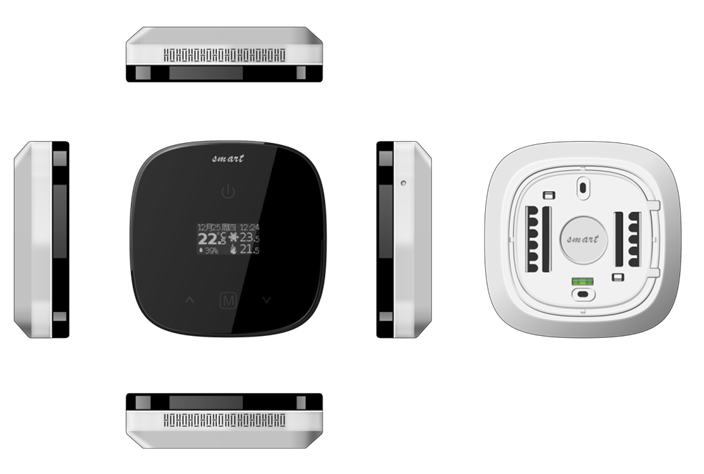 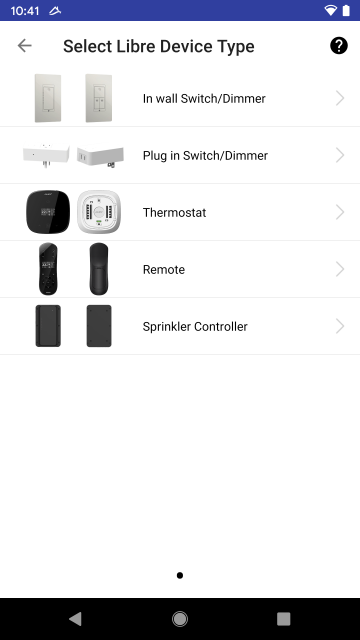 same capabilities as other products:

We promote the open-source development of IoT Apps for our system, especially the thermostat and sprinkler controllers.

The capability of full user empowerment, together with full developer documentation, our system is actually more open than other systems to actual end users!

Soon this system will become a secure, distributed IoT OS. Some nodes will be independent MCUs with a simple but robust virtual machine that is about 5,000 lines of C code and less than 20KB of memory footprint. It will pass certificates for aerospace and be put on spaceships and be deployed on other planets!

Likewise, in our system, every design decision affects interests of different parties involved.

We would welcome any open discussion about our products and services, with regarding to common interests and potential conflict of interests.

And I am grateful that I had a chance to re-invent tree structure.

Together let’s make the world a better place!

IoT, Cloud and Privacy So far, all commercial IoT platforms are cloud-based.

Interconnectivity of Anythings in Any Logical Way

Hornet is a wireless mesh network protocol based on 802.11.4.